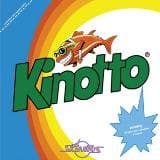 The third album by this combo from Bologna is the apotheosis of their histrionic verve. Directed in studio by Italian progressive rock luminary, Paolo Tofani, Kinotto was released in 1979, and as Freak Antoni himself declared, the album was closer to new wave than previous efforts and its best-known track, "Mi piaccion le sbarbine", was soon on heavy rotation. With Kinotto came also the artistic consecration of the Skiantos, who went from being a cult band to one of the most energetic and histrionic in Italian rock. Invited to replace Italian rock superstar Vasco Rossis back-up band in 1990, and undoubtedly a source of inspiration for the evil doings of Italian "mock rock" band Elio e Le Storie Tese, with Kinotto the Skiantos wrote one of the most thrilling pages in Italian music.