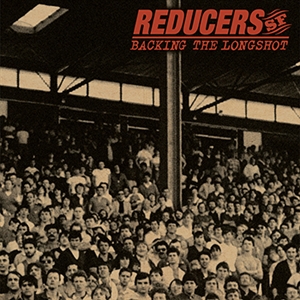 Originally released in 1999 on TKO Records, this classic album set the bar, and was a core part of the soundtrack to many peoples lives for years. Since they formed in 1995, REDUCERS S.F. were an absolute staple for thousands of San Francisco punks and skins. REDUCERS S.F. made a name for themselves, not only in the Bay, but across the world, touring and gigging alongside the likes of SWINGIN UTTERS, ONE MAN ARMY, DROPKICK MURPHYS, WORKIN STIFFS, COCK SPARRER, ANGELIC UPSTARTS, and a slew of other street punk bands. The songs on this record became instant classics. This is REDUCERS S.F.s Shock Troops, and like with COCK SPARRER, we hope to be hearing these songs sung with as much fervor twenty or thirty years from now as well! If you havent heard this, you need to. and if your original pressing is worn out, heres a new one - bigger, brighter and even better than before! Fifteen years on, remastered and released digitally and on colored vinyl, this re-issue will surely give it some new life, and remind people how integral this band was, and continues to be, to a scene still flourishing over 15 years later.

Gold In Peace, Iron In War

Gold In Peace, Iron In War